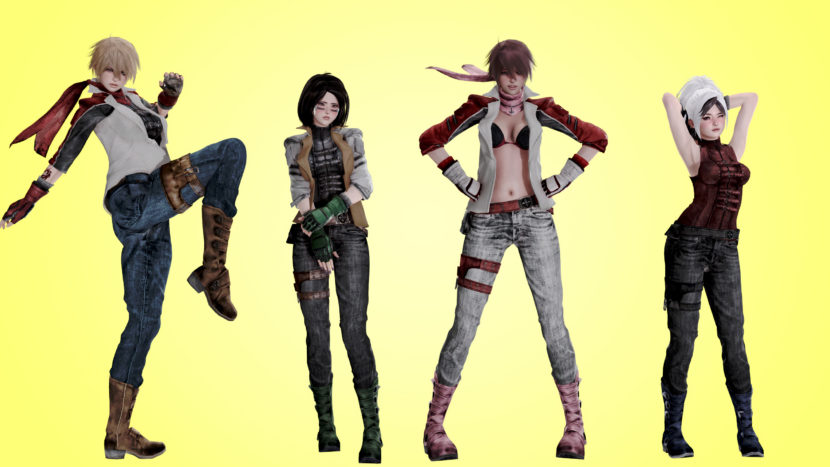 Here’s another strong female outfit brought to you by MRLocolow’s request. \o/

I’ve previously announced this as a KOF outfit but it’s from Tekken, ma bad. /o\ The character’s (Leo) gender is a bit up in the air, though given there’s an official bikini outfit I’ll just put my money on female.

The top inside the jacket had a large chunk of its backside nonexistent (since its hidden by the jacket) so I added that chunk and applied the remaining texture in a pretty straighforward way. At least its functional as a standalone now.
The original character is pretty burly so once again I took a lot of liberties towards the styling of the shape.

The hairstyle seen in girls 1 and 3 of the preview has been added to  Starlene HairPack 01 and will be the last of that pack. There are two versions, one uses the original textures, for the other one I used some Honey Select textures as base.

Almost forgot, a shout out to WidowPuppy for giving me a hand with the pants texture! o/ Overall the original textures just weren’t much to look at, but hey, we try what we can to salvage.

This contains 8 clothing items, details are in the readme.txt file.

Other details: The muffler accessory has two dynamic movement points. One for the ribbon and another for the necklace.

One thought on “Starlene Cosplay Pack 08”